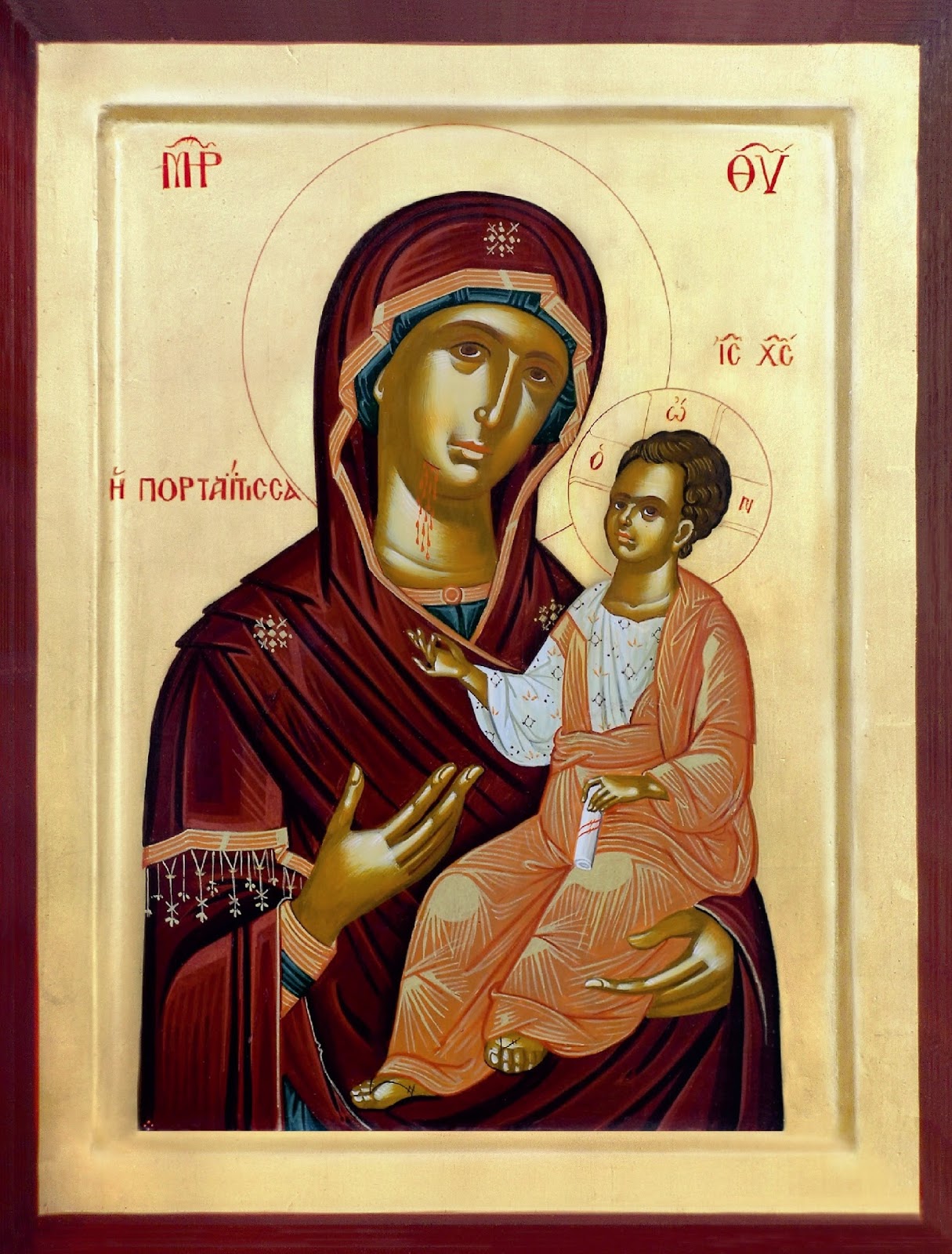 
The hermitage is specially protected by the Holy Virgin Mary worshipped in the Christian East in an ancient icon called “Portaitissa” or “Virgin Mary of Iveron” (the name comes from the Iveron Monastery). In the West, the icon is also called “The Gate of Heavens” or “The Gate of Heaven”. And this is where the full name of our hermitage comes from: Mary’s Hermitage “The Gate of Heaven”. The image shows a version of the icon from the Chapel of the Hermitage. The icon was brought here during a special pilgrimage to Mount Athos in Greece. A monk has written a copy of the venerable icon of the Mother of God "Portaitissa" and here is its short description.


This icon is an example of iconographic type called Hodegetria. In Greek hodos means way. Mary is the guardian and the guide who shows the way how to abide in Jesus Christ. According to the tradition, the author of Hodegetria is St. Luke the Evangelist, who is said to have painted the first icon depicting the Mother of God. The icon was taken from Jerusalem to Constantinopol where it was treated with great respect.


It is said that during iconoclasm (heresy taken place between VII-IX centuries aimed at destroying images of Christ, Mary and saints) soldiers wanted to destroy the Portaitissa icon. When one of them pierced the icon with a sword, the wound on the Mother of God's cheek started to bleed. The icon was saved by a pious widow from Nicaea (nowadays Iznik in Turkey) who threw it to the sea. The icon reached Mount Athos in Greece and was pulled out from the sea by monks who decided to place it at the central altar of the church. The icon, however, disappeared from the church and appeared at the gate of the monastery. The monks placed the icon again at the altar but it disappeared in the same miraculous way. It happened several times before eventually Holy Virgin revealed her will in a dream to one of the monks by saying: " I do not want to be protected by you but I want to be your protector in your earthly and divine life.” In accordance with Her will monks took the icon to the gate and placed it in a chapel.


This gave the origin of Greek word „portaitissa” which can be translated as She who guards the gate, Porter, Guardian of the gate. Keeper of the gate. The reference to this symbol can be found in the Akathist Hymn:

Rejoice the benevolent Guardian who opens the Gates of Heaven to all believers.

The Virgin Mary depicted in the Portaitissa icon desires to keep vigil at the gates of our lives in order to protect us from evil and make us open to good. In this way, Mary opens the gates of Heaven for us as if she was the gate herself. Through her we can enter the eternal happiness in Heaven.

When we look at the figure of the Holy Virgin, we can see that the Mother of God is presented frontally, in half-length, with Her head slightly leaning forward. With Her left hand She holds the Child Jesus (Emmanuela€“. God is with us), while with Her right hand She points at Him. Mary seems to be the heart of the icon, however, in terms of faith, it is Jesus that is the central figure of the icon. Mary's countenance is full of peace, relief and consolation; She is full of grace.

In the lower part of the face we can see a bleeding wound. It symbolizes the event when one of the soldiers wanted to destroy the icon with his sword. As a result, the blood started to flow. The motif of bleeding wound is a characteristic of the Portaitissa icon.

The Mother of God wears a dark blue dress and a cherry-red mapharion. Such a combination of colours expresses and symbolizes the mystery of virginity (blue) and maternity (red) of Mary, who as an earthly woman (blue) gave birth to God in the mystery of incarnation and became the Mother of God, Theotokos (red).

Mapharion represents Mary's maternity and Her complete devotion to God. The three stars on the mapharion, one on the forehead and two on the shoulders, symbolize Mary's virginity. They suggest that Mary remained virgin before as well as after giving birth to Jesus. Those three stars signify the relation between Mary and the Trinity of God: the star on the forehead â€“ corresponds to the Father, the star on the right shoulder- to the Holy Spirit and the star on the left shoulder corresponds to Jesus Christ (this star is partly covered as it identifies with the Child Jesus).

We see that the Child Jesus wears a fair, bluish chiton and a reddish himation. Those two colours combined together signify the mystery of incarnation, the unity of divine and human natures.

Red symbolizes human nature and at the same time the royal dignity of Christ as true God. Blue expresses divine nature of Christ, transcendentalism, Divine reality.
In His left hand, the Child Jesus holds a scroll of scripture as a symbol of knowledge, wisdom and teaching, while with His right hand He blesses His Mother and, through Her intercession, all people.

The figures of Virgin Mary and Child Jesus are pictured in the golden background. Gold represents the light of the eternal glory of God; It represents holiness and deification, as well as the unity, the source of which is God.
In the background we can see Greek words that constitute an important part of the icon. In fact, they are abbreviations marked with a horizontal line with two endings bent in different directions.

The following Greek abbreviations appear in the Portaitissa icon:

H POPTAITICCA (on the left; „he portaitissa”) used as a proper name means Keeper of the Gate, Porter, literally She who resides by the door. „He” is a feminine article

O ωN (inside the nimbus of the Child Jesus; „ho on”) He who is, literally Being; presentparticiple of verb „to be”. „Ho” is a masculine article.

May the Holy Virgin be with you, defend you and protect you from any harm! 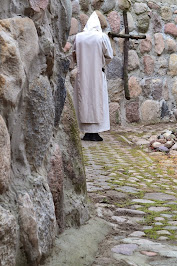